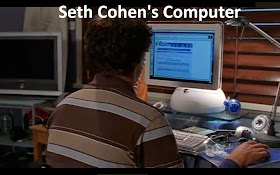 While The O.C. was at its prime Warner Brothers made sure to protect certain O.C. catch phrases, Logo's and even Seth's made up holiday. Warner Brothers purchased many trade marks during The O.C.'s run which were used on promotional products, toys, mugs, T-shirts,  key-chains, posters you name it. Most of which can still be found on Ebay. Now having a trademark doesn't necessarily mean that the holder is going to create merchandise with the trademarked image or phrase, its also to protect from others trying to do it. Here is a list of the most popular OC trademarks that were filed, I think you will find this interesting..All of which can be found on the USPTO (United States Patent and Trademark Office) website.

Here we have the classic logo seen on the original promotional material for the show. I have also scene this trademarked logo used on promotional t-shirts etc.

Another example of the above image

Even the shows most hated but later loved Luke Ward's pilot episode catch phrase "Welcome To the OC Bitch" was trademarked. Albeit much later than the airing of the pilot episode, they probably didn't realize it was going to be as big of a line that it was. That way only one musclebound water polo player can utter this epic line.

Yes here we have Seth's made up holiday which was the first time the holiday ever had an official name. Seth combined both of his parents faith's into one super mega holiday also known as Chrismukkah. This was trademarked much later than the season one episode "Best Chrismukkah Ever", which aired on December 3rd 2003. The name trademark allowed Warner Brothers to own the rights to creating merchandise with the word Chrismukkah on it and or to protect other people from doing the same thus slandering the show. A bonus tid-bit: There is another holiday that combines Christmas,‎ Hanukkah and Kwanzaa, its called Chrismahanukwanzakah. What a mouthful but if Seth found out about this holiday you know the man would embrace it to the core!

Here we have the most popular and ultimately well known The O.C. trademarked logo still seen today on the series DVD's etc.

Last but not least the holy grail of all holiday hats, the Yamaclaus! Interestingly enough The O.C. creators jumped on this trademark in early October 2004 before the season 2 episode "The Chrismukkah That Almost Wasn't" aired on December 16th 2004. Warner Brothers must have had an idea that it's festive hats would be a big hit! You can't say a lot of characters contributed to Seth's holiday as much as Lindsay, which greatly complimented the holiday before she left the show forever. Later in 2012 after the trademark died, a group of guys actually scooped up the Yamaclaus trademark and still currently (as of 2014) has an online shop where you can buy a YamaClaus's all year round. The idea is pretty brilliantly played and their packaging and marketing rules! Examples of their version can be found in the image below or by going to yamaclaus.com

Well there you have it, some of the best and only O.C. trademarks I could find. Interestingly enough there wasn't a trademark for the graphic novel Atomic County..hmm, we better call Zach and George Lucas about this, they could be missing out on millions or even billions!!
Share

Let us know what your thoughts are!